Your Position: Home - Rubber & Plastics - How can the PE protective film be attached to achieve the best results?

How can the PE protective film be attached to achieve the best results?

PE protective film is as easy to use as a piece of tape. However, as the width and length of the protective film strip increase, the difficulty factor also increases a little bit. Handling a 4-foot-wide × 8-foot-long tape is different from handling a 1-inch-wide × 4-inch tape.

A bigger challenge is to get the large PE protective film perfectly aligned with the target surface and then put it down without creating ugly wrinkles or bubbles, especially on the surface of irregular products.

Another way to manually apply a large PE protective film to a large area of material is to apply the material to the film. The following describes a relatively simple way to apply large (4.5 x 8.5 ft) surface armor to 4 x 8 ft materials. You will need a roll of double-sided tape and an art knife. (Note: The material in question should be able to tolerate a certain amount of processing in order for this method to succeed.) 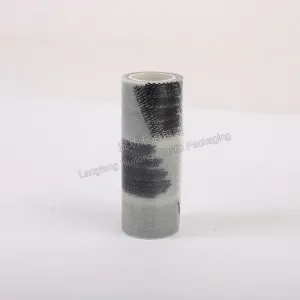 How to fit the protective film perfectly on the surface of the product:

1. Prepare a suitable large and flat workspace - larger than the object to be protected - clean and free of dust, liquids or contaminants.

2. Put 4.5 feet of double-sided tape near each end of the workspace... It's about 8.5 feet apart. These will be used to hold the film, not to protect the material.

3. With the adhesive face up, expand a small protective film. Make sure it is smooth and wrinkle-free and place the loose end evenly on one of the double-sided tapes.

4. Continue to expand the protective film and place it along the length of the work surface not far from another double-sided tape.

5. Now, roll up the film and place it on top, over the double-sided tape. Be careful not to pull one end of the original connection out of the tape, adjust the orientation of the film, make sure that the film is straight, no folds, reasonable tension, but not too tight, so that the film will shrink later. (When the film is stretched during use, the edges have a tendency to pull up when the film tries to return to its original shape.) )

6. Place the film on the second double-sided tape.

7. Using an art knife, cut the reel off the film that is now waiting to receive the sheet to be protected.

8. Place one edge of a piece of material on one end or side of the protective film. Place it in a position where the film is clamped by double-sided tape.

9. Gradually place the components on the adhesive film. Note: If the material is flexible, bend it slightly when you place it on the film, so that it can be rolled up so that air escapes from between the material and the film.

10. In order to ensure that the sheet is attached to the film, apply pressure to the material, especially along all edges, to ensure good bonding. Clean paint rollers may be used for this purpose.

11. Trace part of the contours on the protective film with an art knife and remove excess film. Remove the excess and process it.

12. Carefully flip the section and, if necessary, apply direct pressure to the film to work outwards from the middle to ensure that the entire area adheres well.

13. Check the completed piece of complete, wrinkle-free coverage.       For high-volume production, it is recommended to use a machine commonly referred to as a lamination machine to coat the protective film. This is especially useful when both sides of the paper require a protective film, as the machine can be applied to both sides at the same time.

Component Parts of A Conveying System

What is a conveyor belt system

Thank you for your message.